Aeolian Futures: Wind and Power and in the Anthropocene

In a time when fossil fuels have been exposed as among the greatest ecological threats to life on earth, renewable energy forms like solar and wind power are increasingly promoted as instruments of our collective salvation. But our fieldwork in Southern Mexico on the politics of wind power development has yielded evidence of a more complex story. The stakeholders in Mexican renewable energy are many, ranging from all levels of government, to international industry and finance, to indigenous ranchers and fisherfolk in a region that has, in only a decade, come to be home to the densest concentration of on-shore wind parks anywhere in the world. Some in the Isthmus indeed believe that wind power will not only bring clean energy to Mexico but also upward mobility and economic prosperity to one of the poorest regions of the country. Others are fiercely critical of what they regard as just another effort to extract land and resources for the benefit of those outside the region. In our analysis, we argue against a singular interpretation of “wind power” and toward a surfacing of the multiple effects and ways of wind’s mattering in the Isthmus (and beyond). We call for attention to the “aeolian politics” from which ideas and projects of wind power emerge and we evaluate the multiplicity of “aeolian futures” that might await us. Some of these futures, we argue, may break with the trajectories of the Anthropocene. Others will not. 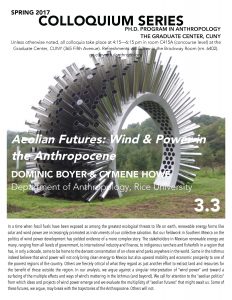