The Anthropology Program mourns the loss of our colleague, Distinguished Professor Neil Smith, who passed away on September 29th. Prof. Smith joined the anthropology faculty in 2000 and was a catalyst for integrating geography into the program’s interdisciplinary profile while amplifying our reputation for activist research and politics, especially that concerning the urban United States. We subsequently shared his energies and insight with the Center for Place, Culture and Politics, which he established soon after coming to the Graduate Center, and the Geography Program. For most scholars and academics, this broad profile of affiliations might suggest limited engagement, but it is a testament to Prof. Smith’s energy, commitment, and intellect that he was a vital and formative presence in all these locations. We feel his loss acutely and personally. 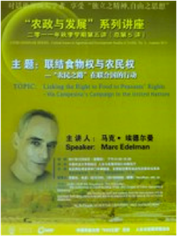 In October 2011 Edelman traveled to Indonesia, where he interviewed peasant organization and human rights activists and government officials about the origins of Vía Campesina’s effort to have the United Nations implement a convention on the rights of peasants. He also spoke on “Experiences with FTAs in the Americas” at a National Meeting on Free Trade Agreements in Indonesia, which generated prominent (if not entirely accurate) coverage in one of Jakarta’s main newspapers.

In December 2011, Edelman and CUNY doctoral candidate Carwil Bjork-James spoke on peasants’ rights in the Columbia Law School seminar on “The Legal and Political Economy of Hunger” run by Prof. Olivier de Schutter, the UN Special Rapporteur on the Right to Food.

Professor Ida Susser’s book, AIDS, Sex and Culture: Global Politics and Survival in Southern Africa (Wiley-Blackwell, 2009) has been awarded the Eileen Basker Memorial Prize from the Society for Medical Anthropology for “significant contribution to scholarship on gender and health”. (posted 11/11)

Professor Karen Strassler has been awarded this year’s Gregory Bateson Prize by the Society for Cultural Anthrolopology for her book Refracted Visions: Popular Photogtaphy and National Modernity in Java (Duke University Press, 2010). The Bateson Prize “looks to reward work that is theoretically rich, ethnographically grounded, and in the spirit of the tradition for which the SCA has been known—interdisciplinary, experimental, and innovative”. (posted 11/11)

Professor Vincent Crapanzano‘s new book, The Harkis: The Wound That Never Heals, has been published by the University Of Chicago Press. (posted 10/11)

Professor Alfred Rosenberger‘s underwater research in the Dominican Republic was featured in a National Geographic story and video. (posted 9/11)

Professor Jessica Rothman’s research on the diet of mountain gorillas in Uganda was profiled in The New York Times (June 3, 2011)

Distinguished Professor Katherine Verdery has won the 2011 J. I. Staley Prize for her book The Vanishing Hectare (2003). The School for Advanced Research (SAR) presents the J. I. Staley Prize to a living author for a book that exemplifies outstanding scholarship and writing in anthropology. The award recognizes innovative works that go beyond traditional frontiers and dominant schools of thought in anthropology and add new dimensions to our understanding of the human species. (posted 3/11)

Professor Andrew Dugmore‘s research on RAPID: Environmental and Social Impacts of the 2010 Eyjafjallajökull Eruption, a pilot project supported by the National Science Foundation, is featued in the article New Study Sheds Light on Volcanic Eruption in Iceland (posted 1/11)

Distinguished Professor David Harvey’s latest book, The Enigma of Capital and the Crises of Capitalism, has been awarded the Isaac and Tamara Deutscher Memorial Prize for 2010. The annual prize is given in honor of historian Isaac Deutscher and his wife Tamara Deutscher for new books which ‘exemplify the best and most innovative new writing in or about the Marxist tradition’. Professor Harvey was also featured in an article by the New York Observer discussing an animated video of a lecture he gave at the Royal Society for the Encouragement of Arts, Manufactures and Commerce (RSA) in London on April 26, 2010. (posted 11/10)

In Physical Anthropology the CUNY Academy for the Humanities and Sciences has awarded Professor Jessica Rothman the 2010 Feliks Gross Endowment Award. This award is presented each year to two untenured assistant professors in the CUNY system who, through their research, show exceptional promise for contributing to their field, the university, and academia. (posted 4/10)

In October 2009, Murphy Halliburton‘s book Mudpacks and Prozac: Experiencing Ayurvedic, Biomedical and Religious Healing, a study in the anthropology of medicine and psychiatry set in Kerala, India, was released by Left Coast Press. (posted 11/09)

Anthropology alum and affiliated faculty member Katerina Harvati‘s recent Sciencearticle on the early modern human fossil from Hofmeyr, South Africa was chosen by Time Magazine as one of the top ten scientific discoveries of the year 2007. Also in 2007, Professor Harvati published a study on the effect of climate on the Neanderthal extinction in Nature. Both papers received wide attention in the international media. More recently she published an article on the Paleoanthropology of Greece in Evolutionary Anthropology, which appeared on the cover of the July-August 2009 issue of the journal. Professor Harvati has appeared in a number of international documentaries on human evolution, including ones by the History Channel, National Geographic and BBC. Her work on Neanderthals is featured in the October 2008 issue of the National Geographic magazine. (posted 10/09)

Professor Don Robotham presented at the Public Forum on the Caribbean Agenda for the Summit of the Americas on March 25, 2009. Read the article. (posted 4/09)

In May 2008, Distinguished Professor Talal Asad gave the David Schneider Annual Lecture at the Society for Cultural Anthropology meeting in Long Beach, California.  He was also named the Joseph Astman Distinguished Scholar by Hofstra University, where he gave the keynote address at the conference on The Politics of Religion-Making in October 2007. (posted 10/08)

Professor Miki Makihara, who was recently tenured in the Anthropology Department at Queens College, has received a “Documenting Endangered Language Fellowship” from the National Science Foundation and the National Endowment for the Humanities for her “Easter Island Linguistic and Cultural Heritage Project” (2006-2008). Her edited volume was published in September 2007 with Oxford University Press: Makihara, Miki, and Bambi B. Schieffelin (eds.) Consequences of Contact: Language Ideologies and Sociocultural Transformations in Pacific Societies. She was recently tenured at Queens College. (posted 10/08)

June Nash, Distinguished Professor Emirita of City College and the Graduate Center, gave the Keynote Address in the Conferencia Magisterial at the Universidad Iberoamericana in Mexico City on September 17, 2008.  Her lecture was titled “Paradigmas Perdidos.” The program celebrated the graduation of students in the University’s Masters and PhD Program. She will also be a keynote speaker at the University of Buenos Aires where the revitalized program in anthropology will celebrate “Jornadas de Antropologia.”  She will present a paper “Cambios de Paradigmas y la Dialectica de Movimientos Sociales.  The program will honor the memory of Esther Hermitte, who served as the only social anthropologist during the years of military rule in Argentina. (posted 10/08)

In 2008, Professor Victoria Sanford published Guatemala: Del genocidio al feminicidiowith F&G Editores, Guatemala. “In Guatemala, in the first years of the 21st century, the number of women assassinated has risen dramatically as has the brutality of these killings.  In this work, the author conceptualizes this phenomenon as ‘feminicide’ and connects it to the genocide against the Maya committed in Guatemala at the height of the armed conflict that devastated the country in the late 20th century.” (posted 10/08)

Jonathan Shannon (PhD 2001) was recently promoted to tenured Associate Professor of Anthropology at Hunter College.  He is the author of Among the Jasmine Trees: Music and Modernity in Contemporary Syria, (Wesleyan University Press, 2006) in which he explores how music in Syria shapes debates about Arab society and culture. He was the recipient of the 2001 Malcolm H. Kerr Award for Outstanding Dissertation in the Social Sciences. In Spring 2008, he gave the TIAA-CREF Distinguished Lecture at Hunter College. (posted 10/08)

Professor Neil Smith has published two books, La Producciόn de la Naturaleza; La Producciόn del Espacio, Mexico City: Sistema Universidad Abierta, Universidad Nacional Autonoma de Mexico, 2006; The Politics of Public Space, Routledge, New York, 2006 (edited with Setha Low). In 2006, he gave a keynote address entitled “Areas, Regions, Scales: Fluid Geographies in a Global World” to the Diaspora and Area Studies department at the University of Toronto; the same year, he gave the J. Wreford Watson Annual Lecture at the University of Edinburgh. He was invited to give the Progress in Human Geography Lecture at the annual meeting of the Association of American Geographers in spring 2008; his address was titled “Of Shibboleths and Ruthless Critique.” In 2007, Professor Smith was a Jurist for the Morse Integrity in Politics Award given by the University of Oregon. (posted 10/08)

Distinguished Professor Talal Asad has been invited to give the Foerster Lecture at the University California, Berkeley during the 2007-2008 academic year.

Distinguished Professor David Harvey received an honorary degree from the University of Lund, May 30th, 2008. The Times Higher Education Supplement (UK) lists Professor Harvey as one of the top 20 most-cited academic authors of books in the humanities. Hehas been elected to the American Academy of Arts and Sciences.

Faculty, we’d love to know your news! Please contact anthro.news@gmail.com with any updates regarding your latest activities.